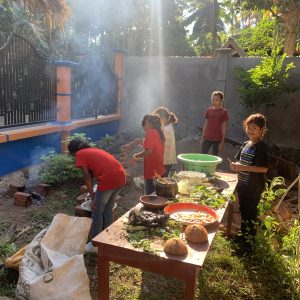 By 6am on Adonara Island in East Flores, Indonesia, there is usually much activity. People rise with the sun and are up working in the garden, seeking out the freshest produce from the local market, or preparing for the day ahead. All of this is set to a chorus of roosters singing. But on 11 July 2019, at the island’s PEKKA centre, something very different is happening as over 70 children of all ages from across Adonara and the adjacent district of Larantuka flood the grounds.

This is the day of the first-ever PEKKA NTT Children’s Festival – an initiative designed to bring children and young people together to share and learn about each other’s local cultures and traditions. The festival offers children multiple opportunities to showcase the unique culture of their respective villages, with their families and community members eagerly cheering them on. There is also the promise of prizes based on teamwork and performance, adding an extra layer of excitement among the children. The festival is organised by PEKKA NTT and co-funded by indigo foundation. As the coordinator for indigo’s partnership with PEKKA NTT, I was lucky enough to attend the festival.

The children had arrived the night before the festival, lodging at the dorms in the PEKKA centre. That evening, dressed in their traditional sarongs, each child introduced themselves to the group. They talked about their hobbies and what they want to be when they grow up, with many excited about becoming nurses and teachers. A great many of these children are recipients of bursaries and were visibly excited and moved by the opportunities their future may bring. The night ended with the children excitedly gathering into 8 teams based on their villages, with each team set to represent their village in a series of challenges the following day.

As dawn breaks and the festival begins, the teams start working together on their first task: cooking dishes traditional to their village, using local ingredients and all without the assistance of their parents. They follow carefully written notes, working diligently to make something their village can be proud of. Some dishes are vegetable-based, others use fresh fish, and one involves a traditional coconut wine that takes us all by surprise. During this time, the lines between teams begin to blur as they mingle with each other, sometimes to check out their competition but often to make new friends. When the judges from the panel walk by and taste each of the meals the children stand proudly by them, doing all they can to appease the visiting judges.

Next, the children perform traditional dances that had been prepared and practised in the preceding weeks. Dressed in their local clothing, each group performs in a way that defines their village, with many routines defining a certain aspect of their daily life, such as weaving, preparing corn and, somewhat cheekily, a courting ritual featuring the boys visiting the girls as they weave in an effort to court them, leading to raucous laughter and much applause. One of the performances features girls singing a traditional song in beautiful harmonies, while the boys use carefully cut bamboo sticks to provide backing percussion, all the while performing in-step dance moves.

Finally, the judges begin their deliberations. The groups are judged not just on what they made or how they danced, but also on the teamwork they showed in doing so. There is a lot of pride on the line and the event is taken very seriously. Nonetheless, there is a strong emphasis on how amazingly all the children have performed, with everyone blown away by just how much thought and commitment they have put into the event.

As the festival wraps up and the children prepare to return to their villages, there is a feeling of change in the air. Strangers have become friends and the children seem proud of their local culture and traditions. The bonds between villages are set to linger long after the event is over. The festival was also attended by local government officials, who spoke at this first-of-its-kind event, validating and confirming it’s importance, and solidifying PEKKA NTT’s strong place within the wider community.

In the closing remarks of the day, the head of PEKKA NTT Ina Dete Deram, captures the sentiment of the festivities by observing that we all become better versions of ourselves when we are open to learning from anyone, regardless of age, gender or ethnicity, concluding that in the end, the most valuable teacher for all of us is life itself.

PEKKA NTT (also referred to as PEKKA Lodan Doe) is a high impact women-led organisation based on Adonara Island in East Flores, Indonesia. PEKKA NTT supports and advocates for almost 3,000 women-headed households in the region, with a range of programs designed to educate and empower local girls and women. indigo foundation signed our first three-year agreement with PEKKA NTT in 2017, which includes a program of bursaries for girls and young women from female headed households from primary school to university, support for women to return to school to pass their high school exams, and the establishment of a network of women-run organic food gardens that provide food and increasingly act as an important source of income.

With thanks to the World Congress on Family Law and Children’s Rights who introduced us to PEKKA NTT in 2015 and funded the PEKKA Education and Community Development Fund running from 2015-2017 – a fund to support children and young people in communities where PEKKA works with scholarships to continue their senior high school and university education.