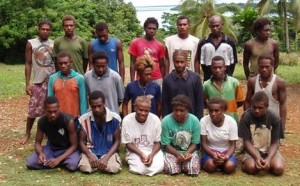 Turusuala Community Based Training Centre (Turusuala), our partner in the Solomon Islands is located on the Weathercoast, one of the least developed parts of the country. It is an area which was particularly affected by the 1998-2003 ethnic tensions. Our support for Turusuala began in 2004 and since then, we have provided $4,000 a year in core funding. Turusuala began by providing educational opportunities for local youth who had been excluded from the education system. Training in agriculture, joinery, building, mechanics, sewing, home management, food, nutrition and literacy was offered.

During 2010 communication and reporting between Turusuala and indigo foundation failed. Consequently, Turusuala thought we intended to discontinue the partnership. In April Lucinda Wilson visited the project with a view to evaluating the situation and determining a way forward.

Much to Lucinda’s delight the program was still functioning well, and Turusuala had continued to develop in spite of the additional demands placed on them with the apparent withdrawal of our support. Achievements include: a flourishing model garden 100 metres by 50 metres producing pineapples, kumera, taro, yams among other things; a new piggery (a piglet which had been payment in kind for a student’s fees is the start of a piggery); classes in life skills including sewing, welding and joinery have been maintained and a village outreach program in food processing (dehydration), and building stock pens is ongoing. There is also a new staff house at the centre and income from products and produce made at the centre and sold is paid towards teachers’ salaries.

In 2009 Turusuala entered an additional partnership with local non government organisation Kastom Gaden Association (KGA) and much of the focus of the program shifted from youth training to self reliance through sustainable agriculture.

However, while consultations with the community revealed they were happy with the new food security elements of the program established with KGA and have ideas for its expansion, there is still a clear demand for trade and life skills programs which do not come under the KGA support and which our fund will support.

Gender equity imbalance, long an issue in this project and across the country, was raised during Lucinda’s consultations. It is important we (Turusuala, KGA and indigo foundation) jointly design a response that as far as is possible, removes blocks and provides genuine opportunities for women’s participation in the project. Many discussions were held about what form this could take and this will evolve as planning continues.

A major outcome from this visit is the appointment of our first in-country Project Manager, long term Liaison Officer Doni Kelly. Doni and his wife Jennifer have been involved with the project as Liaison Officer and teacher for many years. Doni’s appointment compliments several new changes in the Turusuala administration, ensuring continuity in the area of program support. The present Principal of Turusuala is moving to KGA in an Area Co-ordinator position and his deputy, a Turusuala graduate, will become Turusuala Principal.

We are committed to our support for Turusuala and a new three year agreement is being finalised. The objectives in the agreement are:

We have built strong relationships with the Turusuala community and have survived a difficult year with these relationships intact. To quote Lucinda:

“I was so impressed by their [Turusuala] goals and principles and how much they have achieved with very, very limited resources… this is an area in need in a country in need. The people of the Weathercoast are friendly, happy people, but they live with incredibly low food security, limited or any educational opportunities and no transport infrastructure. We paid the equivalent of one year of teacher’s wages to get to and from the project, per person, from Honiara. They were one of the worst affected areas during the ethnic tensions and projects like this are instrumental in avoiding the fall into violence again which may come as RAMSI withdraws. They have no water or electricity and they risk being attacked by crocodiles when they wash their clothes, dishes and selves.  I strongly encourage the indigo foundation to continue to support Turusuala.”